Strategy Analytics has issued its quarterly report on the smartphone market in Europe, and we have a new leader in sales. Xiaomi managed to surpass Samsung and has become the best-selling vendor with 25.3% of the market share. The Korean giant is sitting closely behind and the analysts predict we haven’t seen the end of the battle for top positions.

Boris Metodiev, Associate Director at Strategy Analytics, said, “The European markets for smartphones had a strong quarter driven by Covid recovery, following the crash in 2020. The highlight of the quarter is Xiaomi emerging as the number one vendor in shipment terms for the first time. Xiaomi shipped almost 13 million units on the continent to displace longtime leader Samsung. Xiaomi has seen great success in Russia, Ukraine, Spain and Italy among others and found customers eager for its Mi and Redmi series of feature rich, value smartphones.” 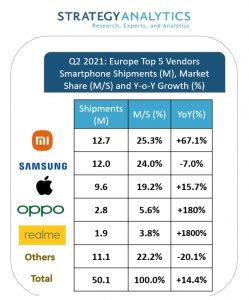 Samsung is the only company in the Top 5 to ship fewer devices, and Neil Mawston, Executive Director, revealed this is due to increasing competition from Apple in the high-end market and Chinese vendors in the low-end scene. It also failed to capitalize on Huawei’s demise, but at least is performing well with new 5G models, thanks to the Galaxy A series.

Apple posted strong results because fans were “overdue to replace their devices” and the iPhone 12 series resonated with them. Realme’s now a top 5 maker in Europe as well, its great Q2 showing being attributed to the Realme 8 series.

Connect more with friends in a fun way...